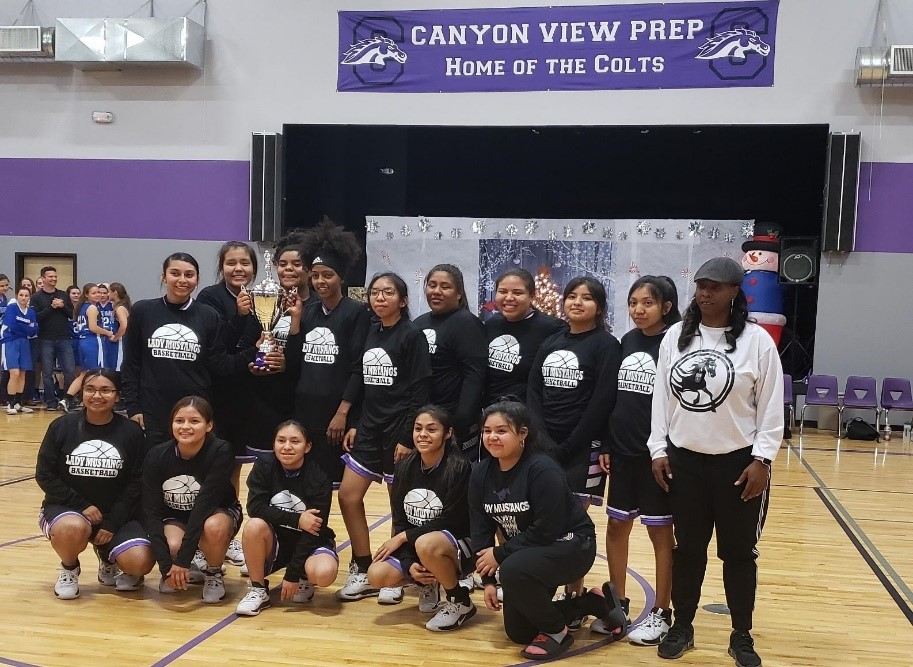 LADY MUSTANGS OFF TO A GREAT START TO THE SEASON!

Posted on January 9, 2020 by skylinegilariver

The Lady Mustangs recently took ‘Showtime’ on the road! Coach Taylor has put together a team that loves a challenge. The Lady Mustangs have logged many miles over the start of the season. “I believe it brings our girls together when they are on the road and all they have is each other!”

The Lady Mustangs have raced out to the CAA State number 1 ranking. The Girls captured the Prescott, AZ Queen of the Mountain Championship over the Winter Break. “It was a rough stretch, but I hold the girls to a high standard and they know what they need to do!” Coach Daveda added. “The Queen of the Mountain tournament organizers were first class people and I can’t thank them enough for their hospitality!” Coach Daveda stated.

Along with capturing the Prescott Title many of our girls were recognized. Junior Cathauli Morris was named Tournament MVP along with Sequioa Lucero and Aliyah Castro making the All Tournament Team. “Winning the MVP was nice, I look at it as more of a team award then anything.” Morris explained “The team as a whole really push each other to bring out the best, we really feed off Coach Daveda’s coaching…it’s more a family then anything!” Morris added.

Senior Forward Sequioa Lucero also claimed the 3 point shooting contest championship. “It was just a fun experience overall to have time with the team to compete over the weekend.” Lucero stated.

“Our goal is to keep pushing and getting better everyday, we still have work to be done!” Coach Daveda stated. “I’m looking forward to getting back in the gym and getting back at it as I know the girls are as well!” Daveda quipped.

The 2nd half of the season kicks off with a busy week. The Lady Mustangs will have a home contest with Basis Ahwatukee Tuesday (Jan. 14) 5:30 along with a road game at San Tan Charter High School (Jan 16) 4:00pm tip off.